So we have six ponies selected to go to China they are a range of sizes and ages and types. We have four gelding’s and two mares they have all been chosen because they have been ridden by children and some have been used in riding schools.

It’s really important to me to try to make life as normal for the ponies as possible while they are in the quarantine process. So I want them to be out of their stable’s and moving around. I also want them to be able to socialise and make friends with the other ponies. Horses and ponies are herd animals and we have to balance their safety with letting them be horses.

So once I have spent a couple of days with the ponies I can start to see their personalities and begin to assess how they might react in a social group. I have decided that our smallest pony Drum Drum is very level-headed and seems to have a very nice nature. I also think that Skitel is quite a gentle nature and that he will feel less anxious if he is friends with Drum Drum who is calm.

So the first day that I introduced them I put Drum Drum in the school first and let him have a run about. Then Skitel, I wanted Drum Drum to be loose when Skitel came in as he is a much smaller pony and its better than he can run away if Skitel had tried to kick him. Nether of these ponies have hind shoes on and they both have rugs so it would be very unlucky for an accident to happen. But it’s always better to be safe so I have put boots on Skitel today as he has front shoes on. Skitel and Drum Drum were super good and had lots of roll’s and made friends.

The next day I was able to add Jasper to the group he is a similar size to Skitel and young, so I hope that he will learn how to behave in the group from the older ponies. Jasper doesn’t have any shoes on either. Skitel and Jasper both strutted about a bit trying to be the best looking pony!! Then they were all super good.

Next we have Hugo he is lovely little pony but he is a busy busy bee!!! always on the go this little guy just has so much energy!! He wants to trot on the walker he wants to canter all day in the school. He has a level personality and is very friendly but he does get a bit stressed. Hugo has all four shoes on and so for this reason he is only going in the school on his own at the moment. I will have his back shoes taken off this week and then he can make friends with the boys. 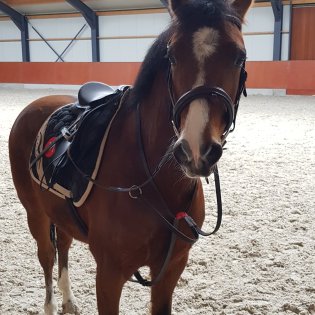 So that just leaves us with our two Mares Roxy and Saskia! Roxy is a bit like Hugo she is a kind nature and very sensible in the stable but she is also a very forward thinking Pony and likes to be busy. Saskia is quite a bit bigger and is a part bred Haflinger she can be a bit bossy and stubborn at times, so I am working with her to improve her manners. Saskia likes to trot everywhere which is ok for an adult handling her but we need to make her child proof! I put Roxy out first so as she could get out-of-the-way if needed and then Saskia went in with her. They had a bit of a girly squeal but are best buddies now. 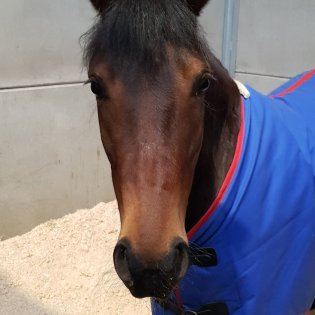 All the ponies are now used to the walker and because they can go in the school in groups it means that I have been able to make a nice routine for them. It’s always a good idea to develop your yard routine around the horses or ponies you have and its ok to adjust it as you get to know more about the individuals you are looking after. Our routine goes like this.

7.15 – 7.20 I hay the ponies, I like to give them hay before hard feed it helps to protect the stomach and decreases the risk of stomach ulcers. Especially as they are not able to graze in a field.

7.20 – 8.00 I go for a 20 min run its always good to keep fit and do another type of exercise. Then a grab a coffee & some porridge and get my warm cloths on its frosty out there!

8.15 – 8.30 The boys go in the school and Hugo Saskia and Roxy go on the walker. I swap this over each morning so the opposite group goes on the walker.

8.30 – 9.00 Muck out the boxes because of the clever super quick vacuum system with just the help of one of the staff here we do the boxes add shaving and sweep up by 9.00!! Super quick.

9.15 – 10.45 – I lunge or loose sch three of the pony’s then wash their hooves to get them used to the wash bay. This alternates each day I give them a brush and rug them up.

10.30 – 13.00 – Coffee and Blog and paper work. I also make reports about the ponies and make any arrangements. I may need to order equipment or run errands.

16.30 – 17.00 – Staff hay and feed at night whilst I clean my tack and make sure the school is skipped out and everything is super tidy.

Over the weeks as the ponies become fitter I might change their work routine at the moment they have an easy day on Wednesday and Sunday. This means I can have a day off one day and on the other day I will be able to get jobs like clipping done. They still go on the walker and loose in the school on their easy days so as they do not stand still for a long time.

← The Ponies have Arrived!!
Coming Soon “The Tales of Neb Toblat!” →